I think I’ve logged more IT support calls this week than ever before… most of which have resulted in frustration (possibly on both ends of the phone) – I guess that’s the danger of being a technical end user, who doesn’t really want to have a 90-mile round trip for a desktop support technician to look at a problem when I can really fix things for myself.

Yesterday’s call was really just a “niggle” though – but, as I was in the process of fixing some of the issues on my PC, one I wanted to be rid of…

Every time I booted the PC (not resumed from hibernation – just on a cold start or warm reboot), I was presented with a Visual C++ Runtime Library error: 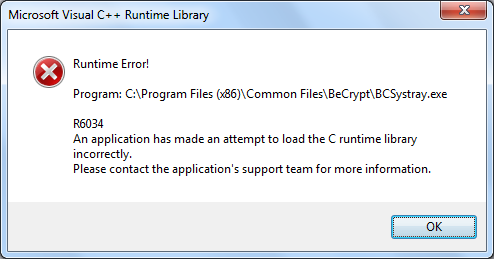 It wasn’t a major issue – more of an annoyance – but Googling didn’t turn up much so, once again, I tried the IT support route. When it didn’t look like I was getting very far, I also tweeted ByCrypt – who were very helpful but, in the meantime, the correct support channels came back with the solution (and a 100% success rate, I’m told).

The issue was that a previous software update had left two startup entries for the BeCrypt system tray application active – one 32-bit and one 64-bit: