After some positive feedback on last week’s newsletter-style blog, I’ve decided to keep going with the format for at least another week.

So, please indulge me in a little narcissism as I write about a week in the world of Mark… although this post is a little late as it’s now the following Monday (I ran out of weekend…)

Last week I wrote about racing cyclocross with my son. I have a 4-bike carrier that fits on a towball on my car but it’s just a cheap one from Halfords and, to be honest, it’s not that great. I’ve been considering getting a roof mounted system for when I have just a couple of bikes (i.e. not the whole family’s) and, I decided to buy a good product this time (buy cheap, buy twice…).

That meant a Thule system – and their website helped me to work out which parts to buy but I was still looking to do better than recommended retail price. After failing to land a couple of Thule ProRide carriers on eBay, I bought the whole setup from RoofRacks.co.uk, including matching locks as standard and free standard delivery.

One thing I thought long and hard on was whether to go for silver or black finish (my car has black roof rails). In the end. I decided on silver – the 10% premium for black parts is simply not worth it – especially as the silver rails/racks have some black components.

Whilst walking in Dorset last week, I spotted a strange disc bolted to a pavement, with the words Survey Mark on it. I asked Ordnance Survey if they knew what it is and they responded to say it’s a “historical bolt style benchmark” – a legacy system for recording the height above sea level.

Back to work (highlights)

After last week’s holiday, it was back to work this week – with a bang. My employer, risual, was headline sponsoring Microsoft’s Future Decoded event – which meant a couple of full-on (but enjoyable) days at London ExCeL in a mixture of stand duty (chatting to delegates, capturing potential sales leads), presenting (4 short sessions on digital transformation) – albeit in a theatre “room” at the side of the main exhibition hall (so not the best environment) – and joining the keynote sessions (though I missed all of the breakout sessions). Added to UK Azure User Group events on Monday and Tuesday evenings, it was a very busy few days!

I really enjoyed the presenting opportunity – I’d like to do more if I get the chance, though I do prefer to create my own content (rather than presenting material created for me). I also saw some pretty cool presentations that I hope will result in some blog posts of their own – particularly the ones around Quantum Computing and DNA Storage.

Hobbling around with a twisted ankle (after last week’s unexpected fall into the sea) has given me a little insight into what it’s like to have limited mobility. I’ve still walked, but more slowly than usual – and not the distances I’d normally expect to cover. No cycling, running or circuits this week either…

The closing keynote at Future Decoded had a major focus on inclusivity and accessibility – including the surprising statistic that 1 billion people in the world are disabled in one way or another (hidden or visible).

Every one of us has reduced ability from time to time – not just people who are disabled. That may be permanent, temporary (as in my case) or situational (such as when holding a child whilst on a phone call). Assistive technology is something that we can all use to make the most of our senses and get the best use of time – the most important thing we have!

Readers of last week’s post may remember that I fell into the sea, with an Apple Watch Series 3 on my wrist (water resistant) and iPhone 6s in my pocket (not water resistant). As well as the discomfort from the twisted ankle, that’s turned out to be quite an expensive slip…

After a couple of days drying out, my phone was working (sort of), with notifications (and even a phone call) on my Apple Watch – and my computers could “see” the iPhone. But the screen wasn’t working so I couldn’t unlock it.

The damage to the phone was covered on my home contents policy as accidental damage but it was going to take a couple of weeks for the insurers to get their agent to collect, assess and then potentially return a repaired device to me. I don’t want a repaired device. Water damage leads to all sorts of longer-term issues, particularly when combined with corrosion, so they agreed to replace my phone if Apple would certify that the device was beyond economic repair due to liquid damage.  After seeing the bright red liquid damage indicator, Apple was happy to do that. Unfortunately, they valued my iPhone 6S at £299 – apparently the replacement price for an upgrade. Take off £100 excess and I had £199 in the bank but no working phone.

I’d only been saying how expensive the new iPhone is and how I’d keep mine for a bit longer the day before I trashed my old one… now I’m paying for that expensive iPhone 8 Plus over 20 months, with interest-free finance through the Apple Upgrade Programme (AUP… or “ay-up” as the staff referred to it… I thought I’d suddenly been transported to Yorkshire). It also gives me the option to exchange for a new phone in a year’s time (iPhone 8S, 9 or 11 or whatever the next one is called), and it includes 2 years’ Apple Care. Let’s hope the camera is as good as I was led to believe by some of my friends (that’s why I got the plus, and why I got the 256GB version).

Unfortunately, iCloud wasn’t backing up as much as I hoped and a restore to my new phone was a little underwhelming. I had backed up my photos manually but there were a few I hadn’t got, and I had some expenses I really wanted to click “upload” on. I searched the ‘net for a local Apple repair specialist to see how much a new screen might cost and found Northampton Apple Repair, who helped me out with a temporary screen and battery so I could take a full iTunes backup of my phone. Having seen the inside of my phone (lots of salt), they were amazed it even booted.

I also learned that:

The Carrot Weather app has an AR mode and it’s pretty cool:

This is what an Azure Stack looks like. Yes, it’s just a (mostly empty) rack of 1U servers and some very clever software:

So this is what an #AzureStack looks like… Our neighbours HPE have one on display, opposite @risual (stand 23) #FutureDecoded pic.twitter.com/V06Yz8Iyh1

This is what a Tesla looks like under the covers:

Ever wondered what a #Tesla looks like under the covers? Wonder no more… pic.twitter.com/8y7DeabZ1L

The Apple 3.5mm to Lightning audio converter is likely to get lost. Maybe leave it permanently attached to a set of headphones (via @timbo_baggins)?

So, how long until I lose this silly thing? (forgot to charge my Bluetooth earphones ? ) pic.twitter.com/M3jPHP5jlo

After a few months of using Todoist Premium for free (thanks to discount codes), I’ve signed up for a year… it must be good because I suffer from subscription fatigue and am trying to avoid adding to the pile of products that I use for “less than the price of a cup of coffee” a day/week/month/whatever. They add up to a lot of coffee…

No cycling for me this weekend but a good opportunity to get together with friends for a bit to eat and drink, followed by fireworks. After reading some night-time photography suggestions from Apple I downloaded a different iOS camera app ( Procam 5) but didn’t really get the opportunity to try it out before the live display…

Taking photos of fireworks is never easy – particularly on a smartphone. I’m quite pleased with some of the firework pics I took last summer though… 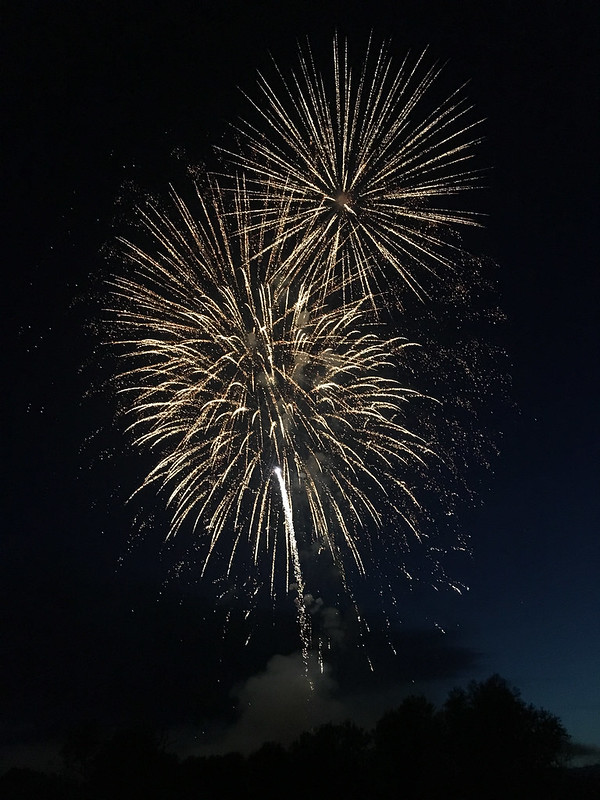 I fitted the new roof bars on Sunday – they look pretty good. I tested the bike carriers too but took them off until I need to use them.

Looks to me like IKEA’s instruction-writers have been moonlighting at @Thule… thank goodness for YouTube! pic.twitter.com/CpLUGosvIZ— Mark Wilson ???? (@markwilsonit) November 5, 2017

The instructions are OK, once you get your head around them, but this video helped a lot:

I’ll be back with more next week – probably a little-less Apple-centric but I need to balance out this week’s Microsoft-centric tweeting, I guess! ^MW